»Making history by repeating it«

Recorded in 1 wild weekend at the infamous Rocket Dog Studio "Making History By Repeating It" is the new album by the Dutch garage trio The Stilettos. 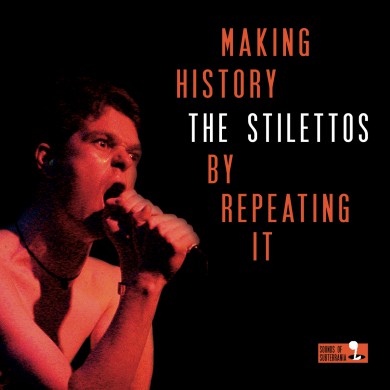 The Stilettos are a Utrecht based 3-piece band consisting of lead singer Ned Harris, drummer RockstarBarry and guitar swinger extraordinaire Drs. Hook. They paid their dues, learned to play the blues and put on their rockin' shoes. The Stilettos share a passion for fucked up, noisy as hell punk rock 'n' roll. Up Yours' Magazine from Belgium called them: "way more threatening and horrifying than hundreds of sleeping Al Quajda terrorist cells."
But they're nice guys with girlfriends, who love their parents. They come out like the mutated baby of a menage à trois between The Ramones, The Pagans and The Rolling Stones, born and bred on a steady diet of beer, marihuana and love gone bad... So what's new? Nothing, it's just that you've never heard it like this before. Pre-historic drumbeats that have recently been dug up were used to make this record and the guitar riffs are rumored to be dreamed up by Keith Richards himself, but he was too afraid the other Stones wouldn't like them... And that voice, it's haunting, angry and soothing at the same time. They're loud, fast, raw, and eager to raise hell and still manage to maintain that overall make-you-feel-good sentiment. It's groovy, high-energy garage rock 'n' roll.
They love to play, and one-day this planet and its crazy shenanigans will come to a stop. The Stilettos want to be on the soundtrack to the next Big Bang, after which people will be dancing again. Savagely, around huge campfires, beating homemade drums with human bones, screaming for what they need and not what they want.