Recorded by Torben B. Jorgensen and Morten Sandager
Mixed and Mastered by Columbian Neckties and Casper Skafte All at Apole Studio Norresundby, Denmark 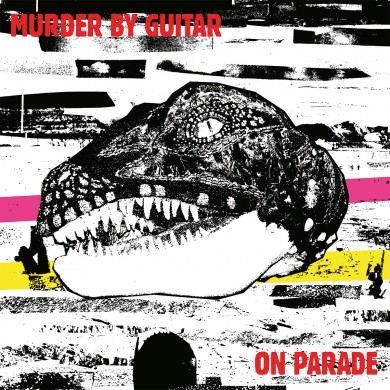 Murder By Guitar is a two guitar drums (and occasional Casiotone) trio whose members are well-known in the aforementioned city`s underground garage and punk scene. Formed in the winter of 2005 with the idea of having a more poporiented sound than their previous bands they quickly wrote a few songs and recorded what was to become their debut 7" "Rock Bottom" for indie label Alien Snatch Records.
It was well recieved but the band felt they needed to progress from their garage rock roots for the album. By the time the songs were finnished they had been listening to a lot of British bands from the late seventies and that certainly influenced their sound. "On Parade" still features the raw garage backbone and the catchy hooks of the 7" but some of the songs have a moodier feel and each song has it`s own identity. These guys know their music history but at the same time they lack respect for it to create a sound truly their own. The no bass approach and the original drumbeats certainly adds to it. The album radiates a joy of playing music rarely heard these jaded days. It`ll infect you and give you a fever, but don`t worry. Call in sick, turn it up and join the parade!!