Faratuben is a great meeting between first rate musicians from Mali and Denmark. The name, is a mix of the words Farafin (black) and Toubabou (white). Instead of playing the traditional kora music, that we know from Toumani Diabaté and Salif Keita, they are representing the bobo-culture. The bobo-music is made for dancing and drinking, and is traditionally played on only balafon (trad. Westafrican marimba) and talking drums in the bobo villages. In the beginning of 2000 it became electrified and brought to the small clubs in Bamako, where it is played in a rough and harddriven way. It was the legendary guitarist and composer, Pakouene Francois Koita, who electrified and brought the music to the capital. Here, he taught his sons, Dieudonne (bas, composition, guitar) and Ernest (lead guitar), to play in this new style. Together with their older brother, the multi award winning balafon-player, Kassim Koita, they arranged and recorded for Ben Zabo. He was the first bobo-artist ever to be played in national radio and his first album got released on Glitterbeat, one of the biggest labels for world music. This gave them a tour in Germany, but soon after returning to Bamako, they split up.
In 2015 Dieudonne Koita, the youngest member of the brothers, got some new friends from Denmark. Accidently they met up on a project for the 1st edition of Bamako Jazzfestival. They started composing music together and in 2016 they formed the group Faratuben and released their first two singles: Pari (peace), and Terete (the wedding dance, which quickly gained notice in Mali. The long distance made it hard for the group to keep a continuing workflow and make a full album. But after 5 months separation, the danish part of the band, left their native Denmark and moved permanently to Bamako. This enabled the group to work focused on their sound and they started to play both traditional ceremonies and gigs in the nightclubs of Bamako, every week.
The music of Faratuben is clearly from this millennium with lots of synthesizers and clubbeats, but still rooted in the traditions from the bobo-villages, that the 3 malian musicians were taught by their father. With their debut album from 2018, Sira Kura (new direction), the band tells a story of social injustice in their native Mali, where the bobo-culture is still struggling for acceptance in society. But, the record is also an international call for understanding and embracing our differences, in a divided world.
When not touring outside Africa, the group continue to perform traditional ceremonies in Mali, as well as supporting other bobo artists like Salome Dembele and Ben Zabo. The band is currently working on their next album

I want to say thanks. On 28.03. I launched the Sounds of Subterrania Artists Fund, a solidarity action for artists, affected by the effects of the Covid-19. Part of this project was the publication of a special artist edition, designed by Jochen Mönig and printed by Philip Janta. Now, almost 4 months later, I have it in my hands and it is needless to say, that it can now go on a journey to you.
I want to say thank you for every donation. Your support actually helped and even if we didn't reach the goal, it was a big help for Faratuben and Bibi Ahmed. Real solidarity and humanity can always be recognized by the commitment to unknown people. That this was important to many of you means a lot to me and it makes me happy.

In this context I would like to announce, that further limited artist editions will follow. The proceeds are also used for social and cultural projects. The regular album "Sira Kura" by Faratuben will be released in October. If you don't want to wait that long, you can buy one of the last copies of the special edition in my webshop. Thank you for your attention and solidarity. 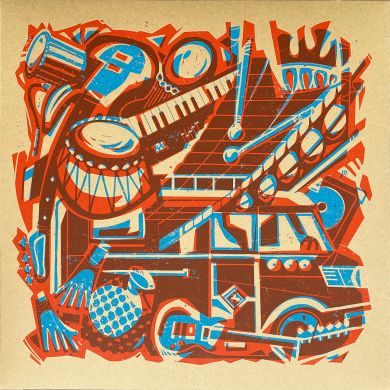 Between Aarhus and Bamako lie 6,593 kilometers – and a deep socio-economic divide. This is why people have long been drawn from Africa to Europe. Unfortunately, the opposite is rarely the case. “Sira Kura”, the debut album from the Danish-Malian band Faratuben, shows what is possible when musicians move out of their comfort zones and meet at eye level. The music from this Bamako-based band is not just another variation of Afrobeat, nor a retrospective reminiscence of Fela Kuti. It is an electrified version of the centuries-old Bwa and Bobo music, and differs from the traditional Kora sounds of a Toumani Diabaté and Salif Keïta with its increased pressure and tempo.
The three Danes, Mikas Bøgh Olesen, Jakob de Place and Mads Voxen, came to Mali as part of an exchange program of the Conservatoire de Arts et Metiers Multimédia (CAMM), where they heard traditional Bobo music for the first time. Bobo is what the French colonizers called the Bwa people, an oppressed minority living in Burkina Faso and northern Mali. The percussive music of the Bwa is driven by various percussion instruments and the sound of the balofon, a type of xylophone with calabashes suspended below. The three Danish music students were completely enthralled with this dynamic sound that accompanies religious ceremonies as well as weddings and parties in Mali.
Guitarist and studio owner Dieudonne Koita, vocalist Sory Dao and balofon virtuoso Kassim Koita, formed a band that was originally intended to perform only once: at the Bamako Jazz Festival. The name Bobo Jazz Experience was used on the posters at the time. But the performance was too grandiose not to continue. At the Bogolan Studio in downtown Bamako, the musicians recorded the songs “Terete” and “Pari” a short time later, which rapidly went into heavy rotation at the TV station ORTM and on various Malian radio stations. In the meantime the band had decided on the name Faratuben, a combination of the words “farafin” (black) and “toubabou” (white).
The musicians often live and rehearse together in the mountains outside Bamako, in a village called Kati, which the Koita family calls home. The Koita family is a large clan that has produced many important musicians. “Electrification is quite new in our tradition, and the first person to play Bwa music on an electric guitar was our father, Pakuene Koita”, says Dieudonne. His brother Kassim has been voted best balofon player in Mali four times. Faratuben are also becoming more and more successful in Mali, playing at weddings, parties and increasingly at big festivals like “Spot on Mali Music”.
In short, it was high time for a debut album! “Sira Kura” is extremely varied fusion, in which the pulsating polyrhythms of Bwa music are organically combined with elements of jazz and art pop – played at a dreamlike higher level. “A modern mix of 10CC and Osibisa”, as keyboarder Mikas calls it. And indeed, such overwhelming melodiousness and such complex songwriting is rarely found in Afrobeat. In Bambara, one of the many languages spoken in Mali, “Sira Kura” means “new direction”.
But Faratuben is about more than parties and good moods. The rousingly combative “Mi Njan Mure Mure” tells of days when Mali was a French colony: “You took our land, you took our space, you torture us, you treated us with barbarity.” The musicians see their band as living anti-racism. As Dieudonne says: “I never thought before that I could meet white people on an equal footing and on one level. That white people live, eat and sleep in my house and live together with my family, just like I do. Such a thing is very rare in Mali. We are happy and proud that through Faratuben we can show that it is possible to create a community beyond race and skin color.”
Meanwhile, the band has also gained a loyal fan base in Scandinavia. In Denmark, where the album was released last year, “Sira Kura” was awarded the Danish Music Award for the best “globalpop” album. And in August, the musicians also received a nomination for the DMA Roots Award.
Faratuben are now back again after being stuck in Aarhus from March to August due to Corona, and could only return to Mali at the end of the month. In their luggage, they carry the songs for their second album, which were written during their quarantine. But, until then, “Sira Kura” will ensure that autumn in Germany sizzles. Bwa music rules!