The undisputed master of the Glampop is back with two extraordinary songs. Hollow Men: 80s, Bobby and his friends smoked clove cigarettes, listened to Bauhaus and Gary Numan and read dark poetry, which they didn't really understand. Bobby was enthusiastic about T.S. Eliot's `The Hollow Men` - cool, completely gloomy, depressing and apocalyptic. Now Bobby is a bit older and according to his own statement: a gloomy teenager of his own - and still does not really understand T. S. Eliot. "But what stands is the desire to dance. It's the revolt. The claim to end the life with a bang, rather than with a whimpering. And so, Bobby and Monica began to sing vowels about vowels and created this diva version of `Hollow Men`. At the Bijou: ... is Bobby's tribute to the first American gay porn movie theater - opened in Chicago in 1970. The Bijou, whose heyday was in the 70s and 80s, was one of the first places with "playrooms" for casual gay sex. The owner went to jail twice because of fornication, and so stands for another, a free America. Now it's easier to be openly gay, porn is part of everyday life and "theater" visits have been uninteresting. Grindr and Internetpornography did their best. And so it came as it had to come. The neighborhood eventually became too expensive to keep it as a theater, so it closed a few years ago and was sold. 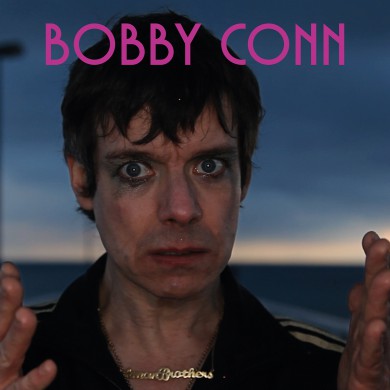 Bobby Conn has been playing pick 'n' mix with genres and delivering messages of politics, hope, despair, revolution and bullshit in his quasi-falsetto since the early Nineties. All this whilst dressed in glitter, eyeliner and high heels that would these days rival Nicky Wire.
Bobby Conn is a vocalist, songwriter, and performance artist working in Chicago, IL. He came out of the Chicago “No­Wave” noise and performance scene in the mid­90’s but quickly developed a reputation for extravagantly excessive performances, satirically political lyrics, and experimental, soul­based art rock.
His studio albums include Bobby Conn (1997), Rise Up! (1998), The Golden Age (2001), The Homeland (2004), King for a Day (2007), Macaroni (2012), as well as various singles, collaborations and compilations. He collaborates with his partner and violinist Monica BouBou, DJ and sound designer Adam “DJ LeDeuce” Greuel, longtime rhythm section Jim “Dallas” Cooper and Josh Johannpeter, as well as many talented players in the Chicago classical, jazz and improvisational scene. With Monica, he often performs as a minimalist electro duo with sequenced backing tracks, and also performs at larger events with his seven piece Superband. He and DJ LeDeuce have a weekly radio show every Monday night from 8PM ­ 10PM called Post Modern Talking on WLPN 105.5 FM Chicago (streaming at www.lumpenradio.com). He is currently recording material for a forthcoming album of dance music titled Recovery, for release in 2017/2018.