African music (probably the wrong term to classify music considering the gigantic size and variety of this continent) has started to fascinate me more and more in the last few years. The main reason lies in the parallels to punk or rather underground music of the GDR. It`s not the notes they play, but rather the attitude and reason for playing that brings up this conclusion. The majority of the music I?ve had the pleasure of getting to know serves communication and often entails the artist-audience interaction.
After members of the Ghanaian-Danish band African Connection had repeatedly been denied entry into Europe, the idea for a label festival in Accra occurred to me. So I started to look out for African musicians and came across a video by Bibi Ahmed. The way he played his guitar mesmerized me from the start, as this meditative music has so many facets. Similar to the music of Morricone, the notes conveyed images and short stories. To make a long story short: I was a fan right away. However, making contact was a bit more complicated since there was no website or Facebook page whatsoever, let alone a phone number or email address ? striking parallels to the music scene of the GDR, again. Thus the search for an appropriate contact proved difficult. After having been forwarded 24 times, I finally received the email address of a friend of Bibi`s and, thanks to Google Translator, nothing stood in the way of communication, finally. It?s safe to say that the old GDR school of communication was of help here. I invited Bibi to Germany for recording and a short tour in February of this year. The result lies in front of you now.
During the recording, the shows and our journey, I realized how little we Europeans can classify the information on life and culture in this part of the world and how much we perceive everything only from our point of view. The fact that before death in the Mediterranean, death awaits in the desert, and death awaits in the mountains. That access to education is free in Europe, whereas parents in other parts of the world have to pay or even fight for the right to education. That there are languages in this world without script and that some of these languages have numerous meanings for their words and are therefore hard to translate, as it is easy to misunderstand them in the context. That regular drone flights are regarded as a sign of safety or that the paths are ever-changing, as the masses of sand are constantly shifting due to the winds.
I have learned all this through Bibi`s explanation of his lyrics, which helped understand his music better, or rather allow me a brief glimpse of his culture and his reason for becoming a musician. With all the apparent disparity, there was a good deal of agreement. Our mutual love for feedback and gritty tube amps. Our habit to beat around the bush. Our stance on work as a process and a way of self-discovery.
Bibi?s music comes with so many facets that captivate me and it would give me great pleasure to see you delve into this fascinating world, too. 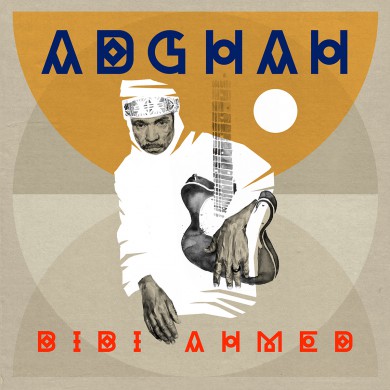 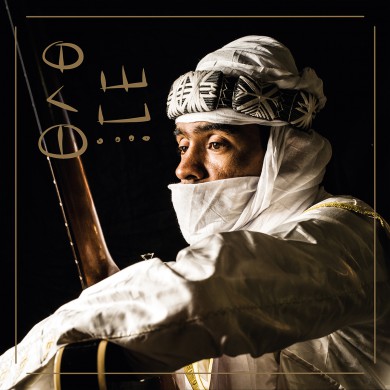 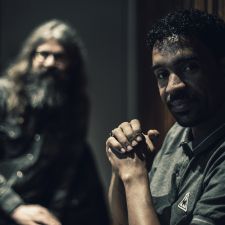 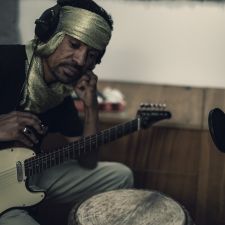 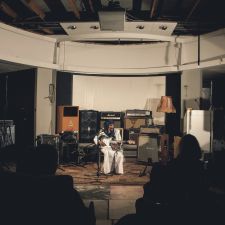 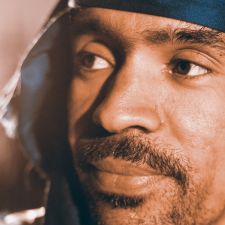 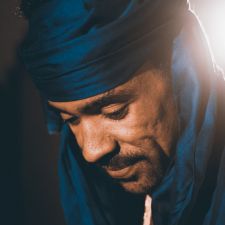 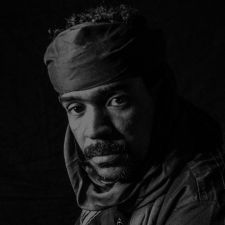 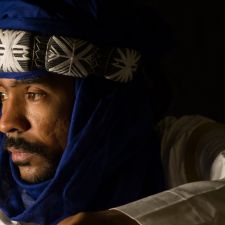 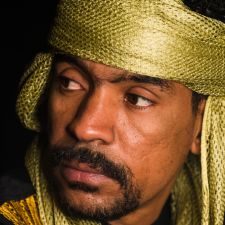 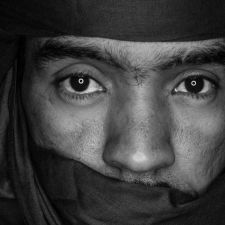 Bibi Ahmed, head and bandleader of Group Inerane, is from Agadez, Niger, which is one of the most volatile, unbridled and dangerous parts of the world. Bibi was soon confronted with the oppression and marginalization of the Tuareg by the national governments of Mali and Niger. Just as early awakened his love for music. As a child, Bibi Ahmed taught himself to play the guitar before receiving his education from the great master and father of the Tuareg blues, Abdallah ag Oumbadougou. Marked by the experiences in the Libyan refugee camps during the Tuareg uprising, Bibi Ahmed and his band Group Inerane gave the rebellion its own musical voice, while at the same time making the rich tradition of Tamachek guitar singing accessible to a new generation of listeners.
In February 2019 and in collaboration with Sounds of Subterrania and Lotte Lindenberg Studio, Bibi recorded his first solo album on which he played all of the instruments himself. This reduction opened up a whole new view on this quite extraordinary mix of Tuareg blues, electrified Tamachek folk and psychedelic Sahara rock. The listener literally feels the shimmer of the heat and, once one embarks on the path of listening, the differences between spiritual trance and hypnotic psychedelic blues become indistinct.