Somewhere in a remote place called Hawkfield, not far from the city of Stockholm, Sweden, music, dreams, visions, goblins and robots, come to life. There are stories to tell, signs and paths to follow, towards the horizon and beyond. Beyond Louie (Love Jonasson) is a singer and an artist who creates tunes and melodies on synths and guitars. On this recording he’s joined by Frank E. Male (Henry Fiats Open Sore), guitar and bass, Staffan Zeroboy Fagerberg (Vidro), drums and Li Jonasson, backing vocals, the daughter of the artist.
Beyond Louie has been an active musician since the 90s as a singer in the Stockholm based garage band Sons of Cyrus, the Berlin band Ray Omega and different music projects like Last Crusade. Beyond Louie is the artists new solo project. This single is the first release, two songs that show two sides of music.

1. Outside Over There
2. Wir sind die Roboter 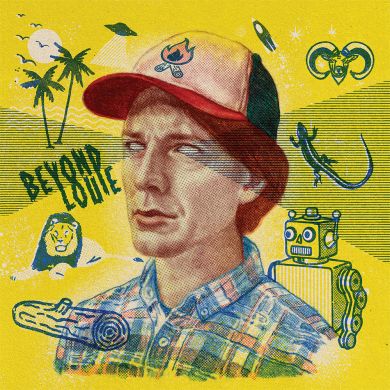